I have no freaking clue how to win it, but my friend Josh and I did just that. More precisely, we took first place in the Men’s division and third place overall. It was an accident, I swear. We were only trying to have fun and would have been happy if we were the next-to-last group. I was only hoping that my bike didn’t break down out of disuse and that I wouldn’t be attacked by a sudden and inconvenient need for a bowel movement. It was a long race.

We navigated around the Grand Rapids area for four hours, from start to finish. This race started and ended at Fifth Third Ball Park. Every race is different; ours hugged the Grand River and downtown after a brief visit to Belmont.

Before the race started, everyone got two large pieces of paper with topographical maps printed on the front and back, along with another sheet of paper with hints about each checkpoint. The checkpoints were scattered throughout the maps. Most of them were slightly hidden checkpoints where you would stamp your race sheet, and some of them were challenges similar to what you’d see on The Amazing Race.

Without going into too much detail, some of the challenges involved searching a library for a book with a phrase we had to write down, memorizing a paragraph that we would tell our partner and have them write down, a street number and business name cipher, having your partner describe to you a pre-assembled Lego structure behind a screen so that you could build a duplicate, counting a certain pattern of seat numbers in the entire Fifth Third Ball Park stadium, and probably a few others.

There was a part of the course that involved navigating a canoe down the Grand River, stopping at a few checkpoints, then landing and running two miles back to the canoe starting point. We didn’t do this challenge. And somehow we won? My only thought is that there were a few teams who were pushed for time but tried the canoe section near the end and didn’t quite make it back before four hours. That’s really the only way I can fathom we pulled this thing off. We rode our bikes through Riverside Park and saw a lot of people running from the canoe drop-off area, but by the time we saw them, we had around 45 minutes left in the race and there was no way we would be able to do that whole section.

Plus, it was freaking hot out. What an awful way to spend a hot day. Running around and looking for clues, basking in the ever-increasing sun. I felt like a busy little worker ant, scurrying to and fro with no apparent reason, all the while being baked by a demented child with a magnifying glass.

There were a number of checkpoints in the woods off of bike trails. Josh and I went to a clinic the prior week put on by the friendly race staff, and we got reacquainted with the proper use of a topographical map and a compass. I didn’t actually use the compass at all today but the clinic saved us in a few spots because we gained a few helpful hints on how to read a topo map. The biggest hint of all, which I failed at a few times, was not to follow other groups. Had I trusted my instincts in a few places, we would have gained a few precious minutes.

Our running wasn’t great. I kept holding up the team because I was getting too exhausted in sections of the city. It was hard to keep a pace because you’re constantly starting and stopping and checking your map, sometimes running faster and sometimes slower. That, paired with the evil sun and my lack of preparation, caused me to halt our running from time to time under the guise of “checking the map.” And my partner, Josh, rode the whole thing on a single-speed mountain bike, either because his normal bike was in disrepair or because he’s a cyborg.

Now that we’re hotshots and we’ve set the bar too high for ourselves, we’re going to have to participate in next year’s race. As winners, it’s free! Before the next race, I plan on training a little better by mixing running and biking. We were constantly on and off the bike, and some sections were all bike while others were all running. The transitions killed me. I’d plan on riding my bike a few miles, running a half mile, and so on in order to get used to the transitions. That, and get a little more familiar with reading a topo map.

My dad used to chide me that I had problems following and reading a map. I think this originated in high school when our church led week-long junior high bike trips, and I was a group leader and, a few times, I got lost. Well, dad, who’s lost now? In the age of GPSes and smartphones, I won a city-wide race using only a freaking map and I didn’t even have use a compass. Have I made you proud now, dad? HAVE I?!? 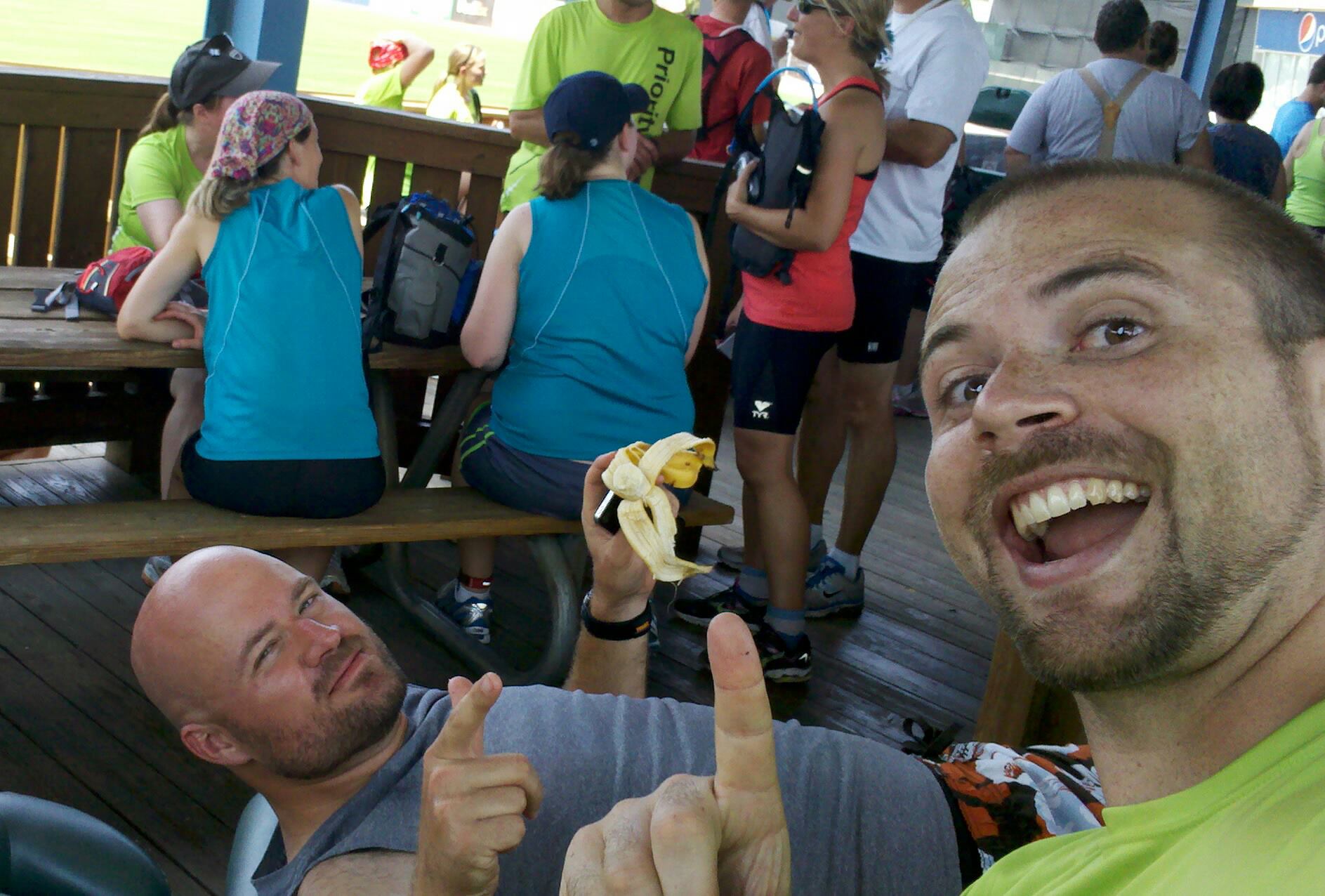 After the race: That’s me on the right, Josh is on his back with a leg cramp #winning