It’s nearly been half a year since I’ve visited the ol’ blog here but I guess that’s one of the parts about being a new dad. There really isn’t a lot of time for much else.

Last we met, I was coming off a two week high of newborn-induced insanity and hallucinations. That was back when I still had waking dreams of baby-related activity. The last time the sleep-coddling happened, I was gently rocking my weeks-old daughter to sleep in an effort to calm her, holding her in my arms and swaying back and forth. I was doing this while on my side in the bed with the lights out, trying not to wake my wife. Several minutes of this went by before my wife woke up and asked me what I was doing, to which I promptly replied in a harsh whisper that I was rocking the baby to sleep. Duh. She then asked if I really had our girl in the bed and I thought, really? Do I have to prove it to you? When my wife said I was freaking her out I decided to flip on the night light and show her our beloved daughter in my arms. The light went on and I stared blankly at the pillow cradled in my arm. Then I stopped rocking. It was the pillow I was trying to soothe. My baby was sound asleep in her crib a few feet away.

But that was months ago. Since then, our baby girl has become amazingly adept at sleeping through the night, a skill which I never fathomed I would come to cherish so deeply. I sometimes fear that we’ve come to rely on it a little too much. We’ve been able to breath a sigh of relief once we put her down around 8:00 pm because she rarely wakes up during the night. I’ve been told by other parents that this is a trait sorely missed in many other babies, so we’re taking what we can get. If there ever is a baby #2, I have a feeling that the good and bad traits will somehow even out and I’ll be longing for those past nights of ease.

For the most part, I think our little girl has turned out to be relatively calm compared to some other babies I’ve been in contact with. She certainly has her moments - lately she has taken to freaking out inconsolably around the majority of my extended family - but for the most part, she’s easy to predict and soothe. And she’s so freaking happy most of the time that it just wipes all the cares of the day away.

Now that she’s a few months older, we’ve taken her out on a few mini-vacations just to prove to ourselves that we could. The first one involved a twelve hour journey to Michigan’s Upper Peninsula where we tried to relax in our family’s cottage for a few days. It was ok and the major lesson we took back from that is the fact that our understanding of “vacation” has to undergo some drastic changes. We hoofed it back a day early because it seemed like the most relaxing vacation was to be at home, and we found it to hold some truth for the time being. And that’s a little painful. We love our travelling and have been itching to get out for a while, but for a few years I think our trips are probably better off short and close to home. That little tag-along is a lot of work.

Last weekend we went with some extended family up to Interlochen State Park and bummed around the Traverse City area. We camped in a tent and she did remarkably well. There was a little freak-out on Saturday after she had been up all day without a nap, but that’s only to be expected.

We’ve got an awesome daughter. I’m really digging this whole fatherhood thing. My life has many more peaks and valleys than it once did, and it seems like I barely get any time to myself, let alone time to write on a freaking blog, but goddamn is it awesome to have a little kid who lights up with smiles and laughs as soon as she sees your face.

Oh, and yea, I completed that Hobbes doll a few months back. Apparently I know how to crochet now, but it was worth it to build a toy for my baby-girl. 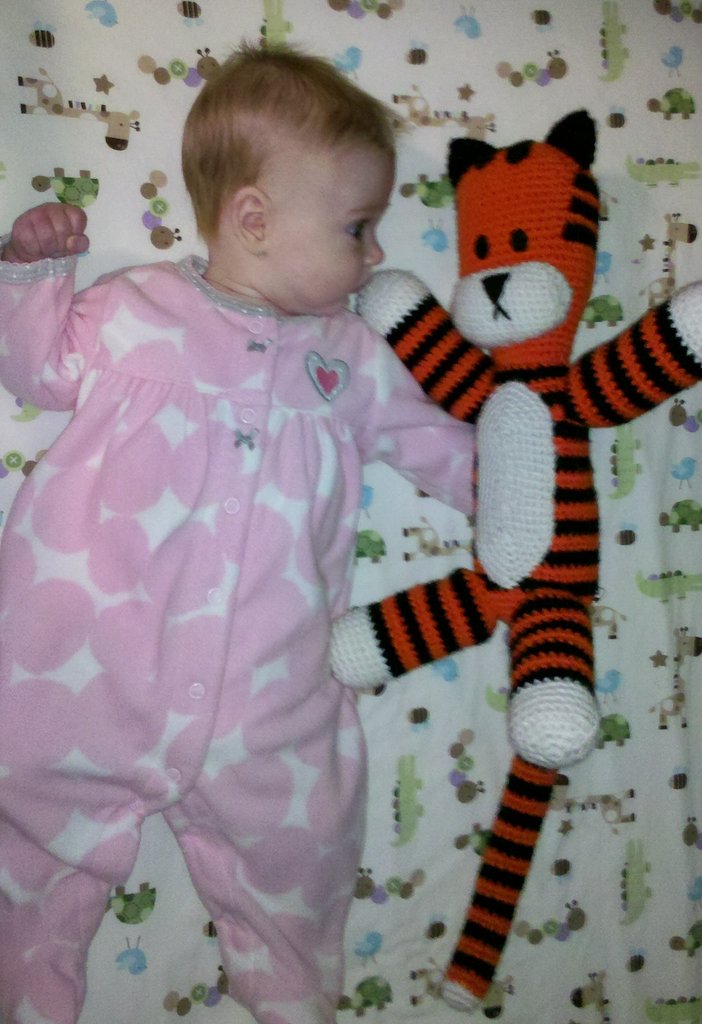