I was perusing Netflix today, and much to my delight, they had _Left Behind II: Tribulation Force_  on demand. This must be another sign of the apocalypse, and I couldn’t be happier. I managed to watch the whole thing!

If you’re into the whole Christian snuff film genre, where there’s only two classes of people, nihilists and Christians, where curse words don’t exist, where the women are kept around only for encouraging and seducing men, one in which you’re sure to leave as a convert, praise Jesus, then you’re going to love this box office hit. For fuck’s sake, they had fire-breathing Jewish prophets! No shit! They actually had fire come out of their mouths to defeat the evil, trigger happy, United Nations gestapo, right after they got done spewing New Testament verses you see on coffee mugs. It was marvel of a film.

So a little background: in the first film/book, Left Behind, the rapture actually happens. No, not like the fake rapture predicted on all those billboards earlier this year. This is the real deal. There are people-less clothes and driverless automobiles everywhere, or at least in the Midwest and South. All us nonbelievers finally get the comeuppance we deserve. Especially those smug Catholics. You’d think life would be much better without all the fundies, but that’s not what Jesus H. Christ has in store for us. Oh no. He’s just getting started with fucking the rest of us over.

This movie follows the up and coming Antichrist. No, not Obama. It’s some other non-American sleazeball trying to sell world peace, Nicolae Carpathia. He rises to the top of the UN, declares a one-world currency, and everyone loves him. That is, everyone loves him except the Christians who are in on the whole joke. This guy is none other than Satan wearing a human suit, a fact which becomes immediately apparent when a Christian shakes the devil’s hand. 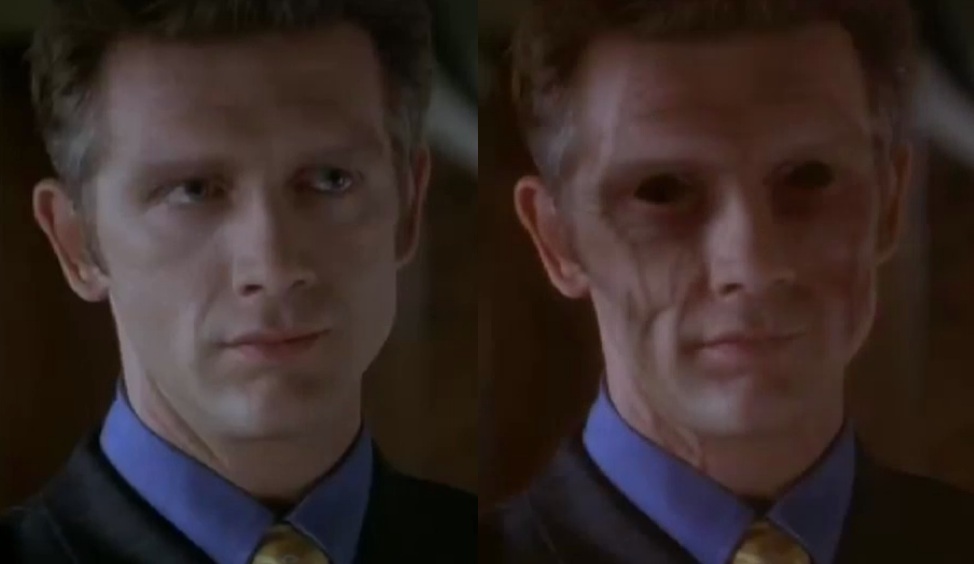 Fun fact: When you shake hands with the devil, his eyes fall out and veins appear on his face

I didn’t edit that picture. That’s exactly what happens in the film while a Christian shakes the Anti-Christ’s hand. The devil is revealed by poor Photoshop skills.

I absolutely adore how they try to convert you around every corner in this movie. There’s an Oscar-worthy scene in which a whiny guy walks out of a church service to go home and spin his old-school revolver around the table, threatening suicide, only to be mentally subdued and converted by the non-Kirk-Cameron star of the film, some guy who’s supposed to be a pilot but reminds me more of David Puddy from Seinfeld. 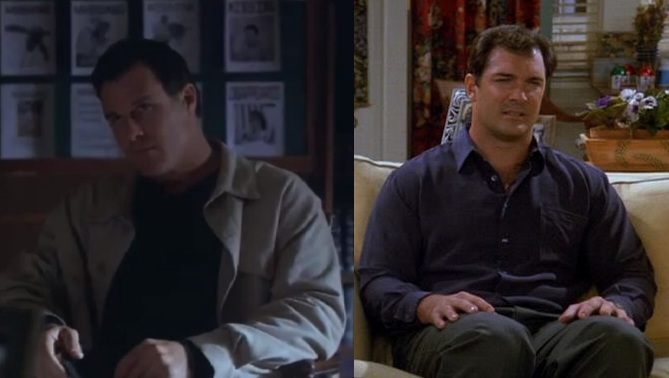 I bet they both have Jesus Fish on their car

We’re even blessed to have Kirk Cameron give his Way of the Master spiel where he pins down some random dude, getting him to admit he’s a thief, a liar, and *gasp* an adulterer because he thought girls were pretty. This is all very confusing as throughout the movie, you’ve got Christians gone wild who are constantly lying about their intentions and stealing the Anti-Christ’s secret documents and email. Thievery, when done for Jesus, is good and totally righteous. High five!

But, by far the best conversion scene was the one where Kirk Cameron and David Puddy stopped time in order to get past the armed UN guards so they could have two vagrants convert a Jewish rabbi. This high ranking rabbi was going to soon announce to the world that this Carpathia chap isn’t only a nice guy, but the messiah they’ve been looking for all these years. Kirk’s not having any of that, so he smuggles this meshuggeneh to the Wailing Wall in Jerusalem, where two homeless men are ranting about the end times and UN guards are shooting anyone who attempts to approach the bums. Some chick in a white dress sings amazing grace and the UN guards freeze in time. Kirk and Puddy stroll through to the homeless men and this rabbi fellow, who has apparently never heard of a New Testament before, hears a few random, cherry-picked verses from the New Testament, and is immediately convinced. Time unfreezes and the UN guards start shooting everything until the climax, where the two homeless men pull an old carny trick and burn them to death by breathing fire on them. WWJD, indeed. 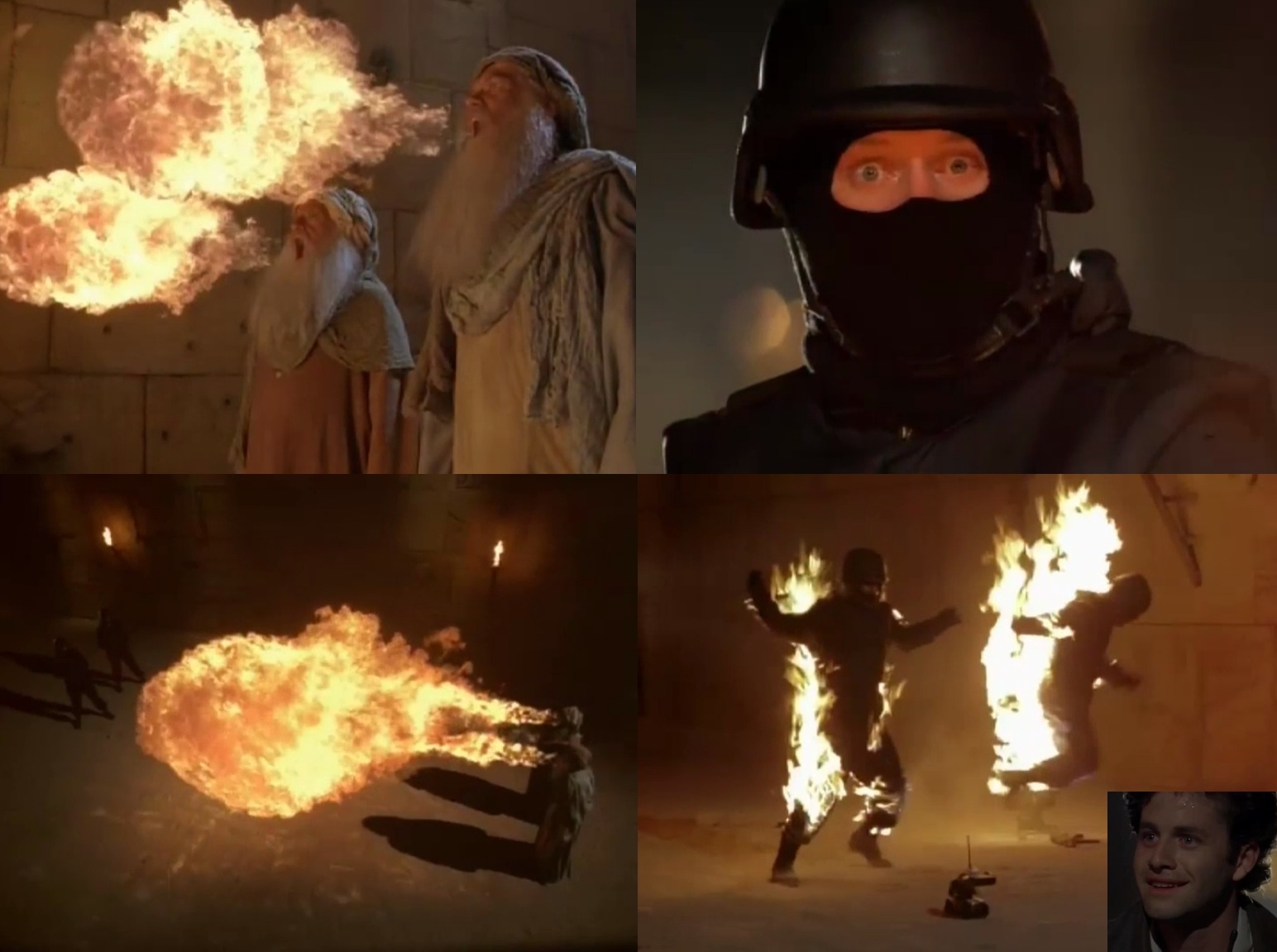 Yes, yes, it sounds confusing. But it’s in the most infallible book ever written. It’s true, trust me.

Of course, the next day, during the big press release, the rabbi pulls a one-eighty on Carpathia and instead of promoting the Anti-Christ, he says that all the bullshit prophecies actually point to the Anti-Anti-Christ. That’s right, he’s talking about our buddy, Jesus! Oh. My. God. You gotta be shitting me. I’m sold.

There’s even a love story. Well, maybe more of a courting story. There’s a whiny grown woman who needs her dad’s and pastor’s approval on everything, especially when it comes to love. If you’re a woman who wants to feel sub-human, you’ll adore this film.

I give this film two upright crucifixes held high. See it now. Before it’s too late.