I finally got my hands on the board game, Intelligent Design vs. Evolution! I bought it as a gag gift for my brother a few years ago but the ungrateful little prick never actually got around to doing anything with it. 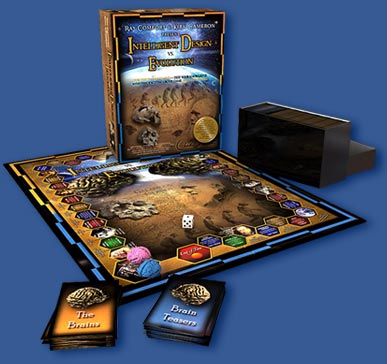 Slightly more fun than an aneurysm

I’m positively giddy with anticipation! This game is going to be unbelievably fun. To start off, I noticed that the box included a DVD called The Science of Evolution. I love science! Let’s see what we’ve got!

Wait a goddamn minute. I thought we were talking about science. Why the bloody hell is Ray Comfort heckling four high schoolers about their knowledge of evolution, with the sole intention of calling out every time they stutter and say maybe, probably, I don’t know, or get the hell away from me? What does that have to do with science, other than to point out the fact that our nation’s science education, specifically in the area of biology, has turned to a stagnant wasteland in large part because of festering sores like Ray Comfort?

Strike one. There’s still hope. Ok, time to get to the science. And, no, wait, awwww, damn it! They’re going through that blasted Way of the Master bullshit again. You know the drill: Hone in on an unsuspecting lout waiting for the bus and barrage them with petty holier-than-thou insults: You’re a liar, a thief, a hamburglar, a goddamn blasphemer, and an adulterer, and Jesus frowns upon you and your shenanigans!

Another strike. But wait! I’ve found redemption. Kirk Cameron shows up with his coup de grâce! In some of his finest acting to date, Cameron goes head to head with an orangutan to illustrate how we can share similar facial characteristics with primates, proving that there must be a common designer! You need to see it for yourself? You’re welcome:

It got weird, didn’t it.

They have a little more fun with this rented orangutan in the movie; trying to buy it airline tickets and trying, rather successfully I might add, to make it eat a salad. It ate three. Take that, science? The closest they get to science is a train wreck of quotes mined to misrepresent folks like Stephen J. Gould. It’s like they stumbled upon the talkorigins.org article about common quote mining tactics and thought it was a brilliant idea.

But I’m way off track here. I haven’t even played the freaking game yet.

It says right on the box, Brains Provided. Fantastic! I’ve already left mine at the door. I won’t be needing it any longer.

The game-play seems simple enough. There is a stack of brain cards and it appears that whoever makes it to The End of Time (yes, really) with the most brain cards wins.

You roll the die and move a squishy, rubbery brain game-piece over the cutest board I’ve ever seen, and as you land on each square, you either get insulted and chastised with statements like, “Lying lips are an abomination to the Lord”, and “Whoever looks at a woman to lust for her has already committed adultery with her in his heart.” Well said, Banana-Man. If you’re lucky, you can land on a square marked with “God’s Grace (unmerited favor)” and you get to take one brain because that’s just how God rolls. Fall on a sinful space and God takes away your brains, you filthy deviant.

Along the way you’re graced with pictures of famous scientists and preachers. I love the placement of Albert Einstein and Charles Darwin immediately after the In The Beginning starting line, sandwiching a No-Brainer space. Get It?!? No-Brainer! Zing!

But that’s not half of it! In order to advance on the board and build up your supply of brain cards, you get to answer a bunch of questions, Brain Teasers, jam-packed with misinformation. I wonder what’s in store…

Playing Against My Relative

In the accompanying DVD, Comfort and Cameron really try to hammer home the our rented orangutan is just as human as us because science says we’re related idea. In the spirit of clinging to this straw-man argument, I’ll be playing this enlightening game with my dog; besides, my wife just shakes her head when I ask her to join me. Oh well. We have to split up into two teams. It’s me against Piper. Human intellect (brain substituted with that in the box) against canine ingenuity (she tried eating her game-brain). 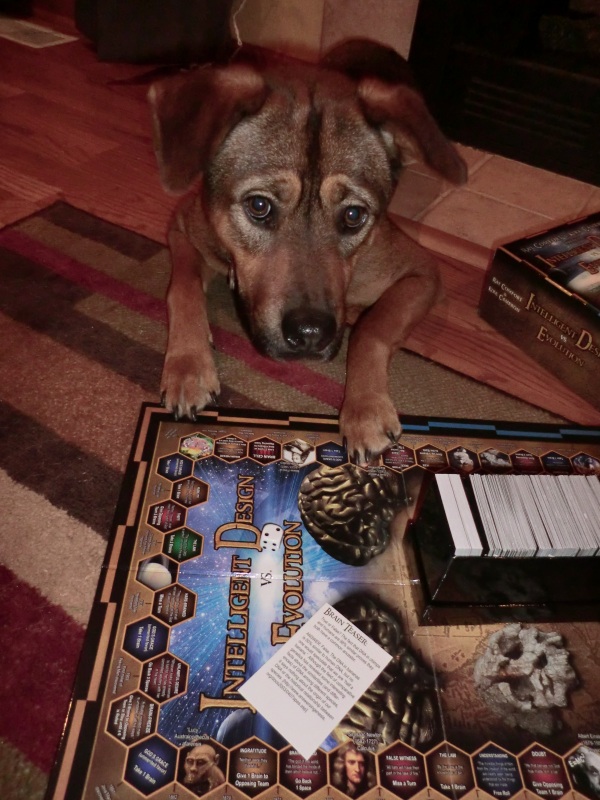 You’re really gonna make me go through with this?

True or False? Ramapithecus, once widely regarded as the ancestor of humans, has now been recognized as merely an extinct type of orangutan.

Did they just reference Wikipedia as a source? Did they just misspell Wikigoddamnpedia? Is the intern typing out these cards? Can’t they get a proof-reader? Jesus Christ.

I laboriously took a few seconds to pull up the Wikipedia entry on Ramapithecus and even it sources an Encyclopedia Britannica article. Regardless, yes, Ramapithecus was once thought to have been a human ancestor but, through the miracle of science and further findings, was later categorized more appropriately under Sivapithecus, a predecessor to the orangutan. Score one for evolution.

Piper got that one right. A wagging tail means true. She goes again. Next card: 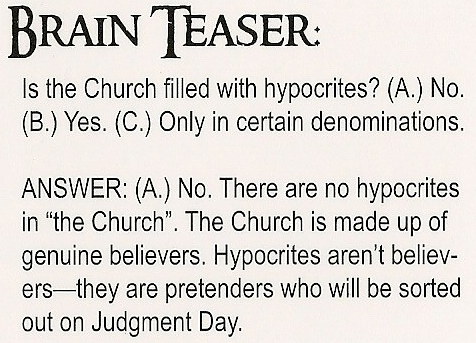 Is the Church filled with hypocrites? (A.) No. (B.) Yes. (C.) Only in certain denominations.

ANSWER: (A.) No. There are no hypocrites in “the Church”. The Church is made up of genuine believers. Hypocrites aren’t believers - they are pretenders who will be sorted out on Judgment Day.

I thought the whole point of this Intelligent Design movement was to distance themselves from at least appearing like they’re a bunch of Bible believing fundamentalists. They appear to be devolving. I think I’m going to keep a side tally going along with these questions. This falls under what is known as the No True Scotsman fallacy.

And yet my dog got it right. A quizzical expression means A. Next question. 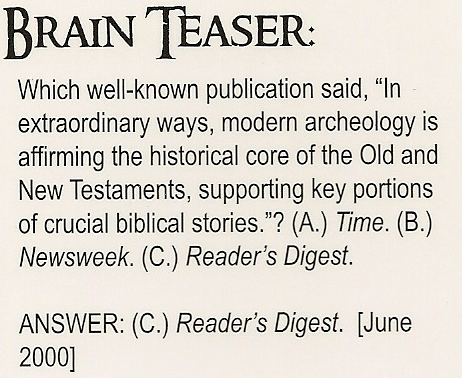 And this matters, why? Is this just filler? They couldn’t find a better place to quote mine than Reader’s Digest of 2000? I’m getting this bad mental image of Ray Comfort sitting on the toilet and thumbing through the Reader’s Digest, grimacing with exertion, until he comes across this gold mine of a quote. I hope he didn’t jump up in elation.

It’s not that I doubt someone said it (it appears to have been said by the author of Is the Bible True? Jeffery L. Sheler), it’s that I just don’t see what could possibly be educational in touting the fact that some loony fundamentalist wrote some Bible-affirming bullshit in the least respectable publication of the three choices presented. This is a game of trivia but I can’t see any benefit to having this trivial piece of minutiae either memorized or worth remembering.

Piper coughed. That means she chose C. I’m never going to get to go. Next card.

True or False? The Bible calls a professing atheist a “fool.”

The Bible is not above ad hominem attacks. Neither is namby-pamby Ray Comfort or monkey-face Kirk Cameron.

Next Card. I don’t know how long I can take this. 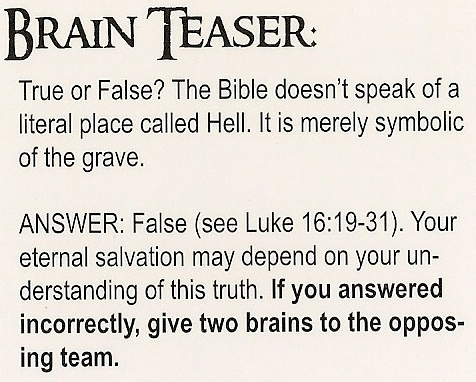 True or False? The Bible doesn’t speak of a literal place called Hell. It is merely symbolic of the grave.

ANSWER: False (see Luke 16:19-31). Your eternal salvation may depend on your understanding of this truth. If you answered incorrectly, give two brains to the opposing team.

****I’ve long given up hope that I might learn something about Intelligent Design or Evolution, but I am constantly entertained by all the pop-shots it takes at non-fundy versions of Christianity. Here we have a jab to the face to anyone questioning the existence of hell (I’m looking at you, Rob Bell). There are also a number of cards attacking Anglicanism or kicking Catholicism squarely in the balls because a prior pope said evolution was just fine with him.

What makes this card even more priceless is the fact that, if you answered incorrectly, you’re punished and have to give up two of your precious brain cards. 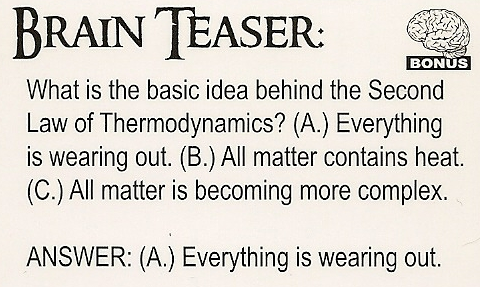 What is the basic idea behind the Second Law of Thermodynamics? (A.) Everything is wearing out. (B.) All matter contains heat. (C.) All matter is becoming more complex.

ANSWER: (A.) Everything is wearing out.

True. This game has worn me out. When you bring up the 2nd Law of Thermodynamics in a discussion about biological diversity, that’s an automatic disqualification.

I’m giving up. I quit. I’m forfeiting to my dog, who was already doing quite well. She kicked my ass. Look at all those brains! 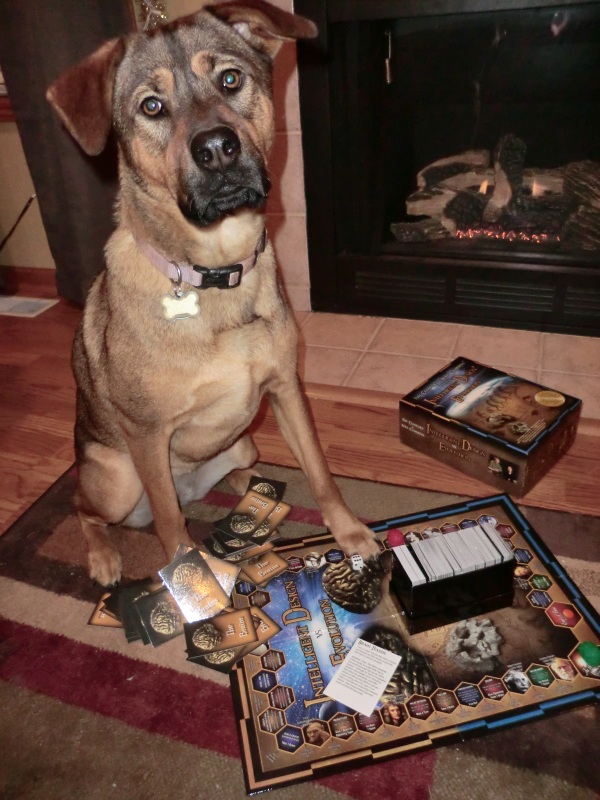 If you’re the kind of person who likes bleeding out your ears, then this could be the game for you. I’m already feeling a little faint from the mind-numbing exertion of trying to stick with it.

The cards can generally be broken up into the following categories:

The largest overall theme of the game, besides the Just Plain Bullshit category, is that of the argument from authority. Reasoning is absent. We are told that things are true because The Bible or Some Guy said something or other; we’re often hit with quote mines from legitimate scientists where it attempts to attack evolutionary theory by intentionally taking things out of context. Punctuated Equilibrium quote mines abound. My take on this is that, since fundamentalists take the word of prophets verbatim, they think that by tearing down the, uh, “prophets” of biology, they strike a blow. Science does not work that way.

While many of the cards cite their sources, they don’t really seem to understand the notion that it helps to have a reliable, respected source, otherwise you just look like a buffoon. Some of the more entertaining sources include wickipedia, World Net Daily, The Answers Book by Ken Ham, Reader’s Digest, and The Evidence Bible, by Ray Comfort (coauthored by God). I love Wikipedia as much as the next guy, but if anything, it’s only a place to get a general idea about a topic and gives you a rabbit trail to follow to find more legitimate sources. And if you source something that you yourself wrote as evidence, that’s the same thing as masturbation. And it’s a sin.

The DVD was a laughable mess of logical fallacies and sales pitches for The Evidence Bible and Way of the Master toilet paper. I was ready to write down the number to the Rent-An-Orangutan place, but they didn’t bother sharing that with us. That’s a service I could use quite regularly.

To wrap it up, I’ll just give you one more card. It sums up this game quite nicely. 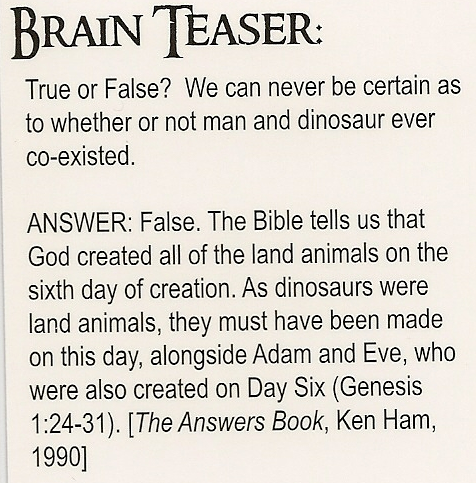 True or False? We can never be certain as to whether or not man and dinosaur ever co-existed.

ANSWER: False. The Bible tells us that God Created all the land animals on the sixth day of creation. As dinosaurs were land animals, they must have been made on this day, alongside Adam and Eve, who were also created on Day Six (Genesis 1:24-31). [The Answers Book, Ken Ham, 1990]