When I saw a billboard advertising that the author of the book, Heaven is For Real, Todd Burpo, was coming to town, I knew I had to go. What luck! He preached today at the local party church, Daybreak, and it was every bit as absurd as I hoped it would be. 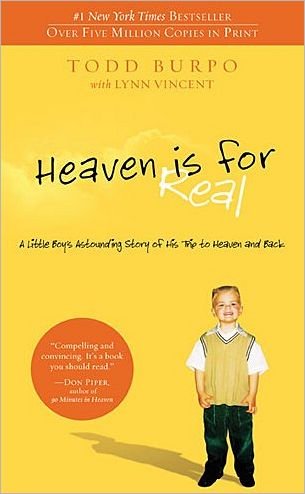 I wanted to read the book first, but I’m on the library waiting list behind 42 other people. Welcome to West Michigan. There’s no way I’d pay for that crap. I was, however, able to get my hands on the kids’ version of this book from the site, booksneeze.com, which gives you a crappy selection of books you can have if you promise to blog about them. There will be a review of the kids’ book soon, but it may not be kid-safe.

Regardless, I’ve watched interviews and read excerpts and reviews about Heaven is For Real, so I’ve got a good understanding of the premise. It goes something like this.

Todd Burpo is a fundamentalist Christian pastor with a high degree of credulity and a complete lack of critical thinking skills. His son becomes sick and they mistake a burst appendix for the flu. Before it’s too late, the boy has surgery to fix him up and clean out his insides. Surgery, it turns out, works much better than prayer. The boy, Colton Burpo, is nearly four years old at the time.

Over the next few months, Colton tells his dad that during the surgery, he visited a stylized cartoon version of heaven in which people had wings and God sat on a throne and showed his superiority by being physically large and wearing a crown. The boy’s parents believe this because Colton says he was hugged by his dead sister, which the parents immediately take as proof because of a previously undisclosed miscarriage.

Todd fiercely encourages his son’s delusions, then writes a book about the ordeal and parades the youth around the country, appearing on talk shows and in churches throughout the land. This brings us to Daybreak Church.

The book has been on the New York Times bestseller list for 62 weeks now, a fact mentioned several times during Todd’s sermon today. He’s also got a kids’ version of the book which is doing quite well, and he let slip that there is a movie in progress. He kept saying how his constant prayer is that God uses him; “Use me! Use me,” he says, completely oblivious to the fact that he is indeed being used by the publishers and the producers because they know shit like this sells.

Colton wasn’t in the service today, but his dad said that the times when he is there, they usually close out the sermon by singing Amazing Grace together on stage. I feel sorry for that kid, being paraded around like a circus freak, having all his delusions affirmed by his adoring fans. He’s going to have that follow him his whole life. He might make a great skeptic someday if he can break free of this curse his father has put on him. It only takes a rudimentary level of critical thinking skills to break the mirage of anything miraculous.

I don’t have kids, but I know a few basic facts about them that the Burpos have conveniently forgotten: Kids have wild and vivid imaginations, often misunderstanding where imagination ends and reality begins. As their brains mature, their minds are sponges that soak up every nuanced detail around them. Todd Burpo was a fundamentalist pastor. Colton was absorbed in religious imagery and sermons his whole existence. Todd was amazed when Colton described markers that were on Jesus’ hands because he, a pastor, didn’t understand how his son could have possibly known that Jesus had nail wounds. That makes him either a shitty preacher or incredibly dense. Maybe both.

Actually, yes. He is a shitty preacher, as evidenced by today’s sermon. To be fair, I tend to think this about most preachers. His talk today was empty fluff meant to raise the emotional pitch of the room. There was no substance whatsoever. It was a nauseating retelling of his son’s illness and recovery, complete with forced tears I’m sure he squeezes out at every performance. He’s amazed, as am I, at the great reception his book has gotten and concludes, unlike I, that it’s a miracle instead of correctly attributing it to our country’s appetite for mindless Christian drivel. For good measure, he also tossed in a few statements about the dismal state of the nation because of prayer being forced out of schools and evolution being taught as science, even though it’s just a theory.  This led to bragging because his book was recently approved to be included in public school libraries, or so he says. Great! It would be an excellent resource for a class in critical thinking.

I would be remiss if I didn’t spend a minute talking about the train wreck that is Daybreak Church. My visit was wildly entertaining. Everything is very polished and dramatic, and they’ve got an abundant number of graphic designers and media people who ensure that there is never a moment of silence. The service started out with a rock band singing Footloose - I still have no idea why - complete with sexy dancers and shoes hanging from the ceiling. At every stage change, of which there were many, there was a professionally crafted commercial on the big screen, even a ridiculous guy pretending to be an SNL super-fan talking about the Super Bowl - again, I have no idea why. Then a bunch of dancers came out on the stage, the men wearing football uniforms complete with shoulderpads, the women wearing sexy oversized jersies, and they all danced for a while and threw a few passes. It was all very confusing. They awarded Todd Burpo with the Daybreak Seeker’s Award; I guess, for his outstanding Quidditch performance.

The best part about it is the fact that I am now entered in their Win a Caribbean Cruise for Two drawing, which will occur next week. Nothing would make me happier than to have a cruise paid for by church tithings.