Heaven is For Real for Kids is an amazing first-hand account of the reality of heaven filled with more truth than you’ll find in any science textbook. It is a fitting addition to any home-school parent’s arsenal, as it is a first person account of truth, more real than any theory so-called scientists have ever made up by digging around in the dirt. I believe this book is inappropriately labeled a children’s book when it should fall squarely under nonfiction, in the TRUTH section. 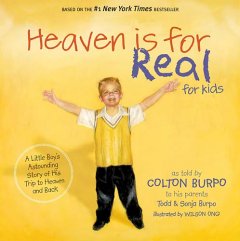 So is Santa Claus

Colton Burpo has done this world a great service by bringing this story back from the other side with such precise details, and Todd Burpo has given this world an incredible gift by not dismissing Colton’s story, as so many parents would, as the delusional ramblings of a four year old, or as the result of an overactive imagination from the son of a fundamentalist Christian pastor. We are blessed that Todd Burpo had the strength to buy everything Colton said, hook, line, and sinker. What a blessing!

The facts in this book chill me to the bone! Now we know, without a doubt, the fate of anyone going under general anesthesia. They go to heaven! Temporarily! You see, tiny Colton had a burst appendix because of his or his parents’ sin (we aren’t told which), and he is taken to the hospital to be operated upon. This is where the story picks up; when an angel swoops down to bring him to heaven for an afternoon of revelation.

Heaven is for Real for Kids was directed and approved by Colton, so we know we can trust the illustrations in the book to be TRUTH. The Bible speaks of Jesus and crowns in heaven, and we now know what Jesus’ crown looks like. The King of Kings’ crown is remarkably similar to the King of Burgers’ crown. Praise Him! 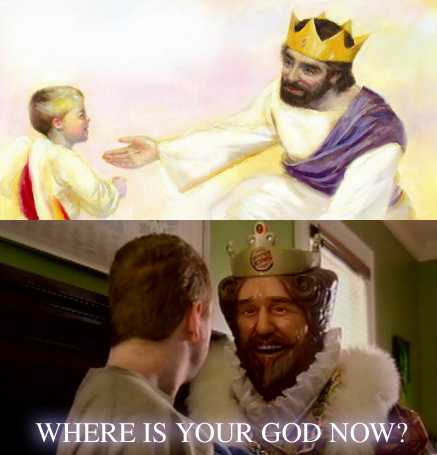 It’s also worth noting that God is probably still as appalled by your naughty bits in heaven as he is on earth. All the illustrations approved by Colton show that the people and angels in heaven all wear the same white Snuggie, draped with a sash colored with one of the colors of the rainbow. It’s clear that Jesus doesn’t want anyone wandering around heaven with their tally-whacker or dirty pillows flopping around for all the angels to see. We get to bring our modesty to heaven, where God will reward us with perfect bodies that we can hide from everyone!

Colton sees all sorts of people in heaven. I was amazed that he saw King David and Samson in heaven. They weren’t even Christians! They could never have believed in Jesus or said the sinners prayer, yet there they were, hanging out with Colton. This is ground-breaking stuff! I always thought the Jews had it wrong and only Christians were allowed into heaven! We may have to rethink some of our theology, but that’s how good science is done: go where Jesus leads you for the evidence!

Another remarkable thing Colton saw was his older sister. Colton’s older sister was never born, she was a miscarriage. And she’s in heaven! This has vast implications. If all the aborted and miscarried fetuses are in heaven, this is great news! What’s more, is that if you extrapolate just a little bit, you realize that life doesn’t necessarily begin at conception, but it begins when two living cells, the sperm and the egg, join together. I may be going out on a limb, but if zygotes and blastocysts can make it into heaven, what’s to say that wasted eggs and sperm don’t get to heaven as well? This is great news! I’m in my mid-thirties, and I’ve been jerking off ever since I figured out how. And I mean a lot. How exciting is it going to be when I get to heaven and come face to face with all those billions upon billions of unrealized children that I thought were wasted in a tissue! What a joyous reunion we’ll have! They must be having a grand time right now in heaven, partying with Jesus, even as I write this!

Colton Burpo is very clear in the book that heaven is a very real, very physical place. He presents some very astounding things in the book which boggle my mind. For instance, everyone has wings except, oddly enough, Jesus, who just has a horse with homosexual rainbow hair color. He says that people can use the wings to fly if they want to, but if you inspect the pictures diagramming peoples’ wings, it’s easy to spot that the physical structure of the wings would be far too fragile for regular use. Or would they? People thought the same thing here on earth about bumblebees, that their wings were far too fragile for flight, until it was found that they just flap their wings super fast to achieve a hovering state. Imagine how much faster people in heaven must have to flap their wings in order to remain aloft! Imagine how much faster still the typical fat-ass American will have to flap their wings to keep their flabby bellies in the air. God is Great! 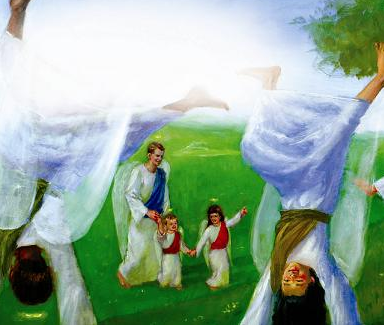 And if you wrongly thought angelic wings were only the fever-induced dream of the schizophrenic author of the Book of Revelation, you’ll also be surprised to learn that circular halos hovering above the head are one hundred percent absolute fact! Take a look at Colton’s picture above. Everyone has halos! Even the upside-down guy on the left has one and it’s still hovering inches from his cranium despite gravity. Creepy! I don’t see any steel rods jammed into their skulls so I’m assuming God’s using another one of his unexplainable tricks: Magnets! How do they work?

If, like me, you thought it was crazy that God allowed a few Jews into heaven, get ready for this: Colton played with elephants and kangaroos in heaven! I thought C.S. Lewis was out of his gourd when he portrayed Jesus as an actual lion in the Narnia books, but apparently, that’s all true too! Animals also need to accept Jesus into their hearts! This must be especially joyous for animals that have multiple hearts. The squid has three hearts! Triple the Jesus! Lucky! 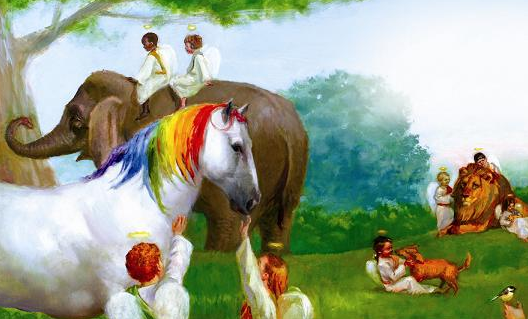 I told you the horse was gay

One of the themes that keeps coming up is that, in heaven, rank is determined by size. Colton describes the more important angels as being as tall as giants. One of them carries around a flaming sword that’s reportedly as big as Colton’s father. I bet Colton’s mom would disagree with that!

The most important one in heaven, and the largest in stature, is of course, God the Father. Colton visits the cold and sterile throne room of the Trinity, reporting that it’s his favorite place. To me, the thrones just look unnecessary and uncomfortable, but the same can be said of English royalty. It’s probably just God’s way of looking down on us, something he must do regularly because, at his size, we are about as small as kittens. Boy, no wonder Mary lived life as a virgin! After taking something the size of the Holy Wang, she probably couldn’t walk for days! 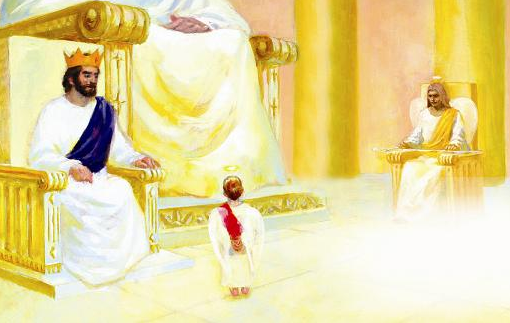 From here, we can almost see up God’s Snuggie!

This dispels yet another myth for me. I was always under the impression that God sat on an Aeron chair. Thanks for the clarification, Colton! Now we know that the three Gods sit in straight-backed uncomfortable chairs with no padding, and that the Holy Spirit sits awkwardly to the left of God and Jesus. He always gets the shaft! And, he doesn’t even get a Burger King crown to wear; just a shitty magnetic halo hoop like any old angel. 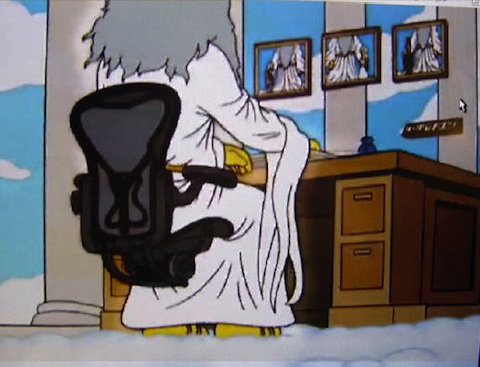 Truly, this is the Chair of the Gods

Colton doesn’t die! Ever! He’s just unconscious for a little while as Jesus miraculously and inexplicably saves his life! He brings back great tidings of joy and the never before heard message that - wait for it - Jesus really, really loves children! It’s just that ridiculously simple. Or, more aptly, simply ridiculous!

_Disclaimer: booksneeze.com unwittingly provided me with this book in exchange for a review. It seems to be a website for Christian-only books and reviewers. Let’s see how long I last before they catch on._